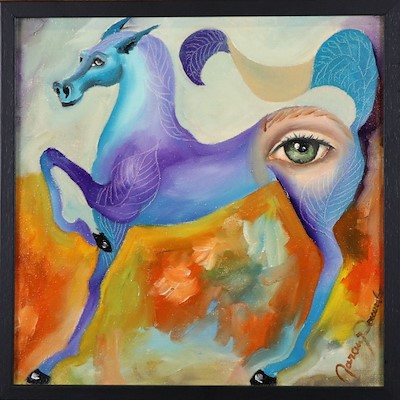 Pamuk, who was born in Istanbul in 1967, was introduced to the arts during her childhood in Germany. After returning to Turkey, she completed basic education in the arts by graduating from the Painting department. She worked from her house, her studio and from the studio of academician Yavuz Deniz. She has also held art classes at Bakirkoy Center for the Arts (BSM), Bakirkoy Center for Arts and Culture (AFEM), Taksim ART Gallery, and in her own studio.

Figures are the main focus of her fantasy-inspired surrealist work. She is known for taking social situations that have affected her, or images that have influenced her, and using her paintings as a reflection of her own interpretation of these events. She has lived through her artistic career with sensitivity and awareness and works towards using her art to express her take on social matters.

Pamuk has held a total of 28 exhibitions, 14 of which were solo and 14 group. In recent years, she has been focusing on social responsibility projects, specifically on raising awareness for blood, organ and stem-cell donation. For this cause, in support of Blood and Stem-Cell Volunteers Association (KHGD), she has organized two solo and one group exhibition – “Will You Stand by Me?” in September 2014, “The Enchantment of Horses” in November-December 2016, and “Roots” in November 2017. In support of the Turkish Foundation for Combating Soil Erosion (TEMA), she organized a solo exhibition named “Breath” in May of 2015. This exhibition was a substantial attempt at raising awareness about nature consciousness. In October 2015, she organized an exhibition named “To Tomorrow, With Hope” in support of the Mehmetcik Foundation.

Nazan Pamuk, whose motivation behind creating art isn’t only to address art lovers, but also to deliver a thought-provoking message to all who come across it, is aiming to shine a light on the limited amount of freedom for women in our country through her latest collection named “Mad/House”. The wild horses, which are the main focus of her paintings, are a representation of not being dominated over.